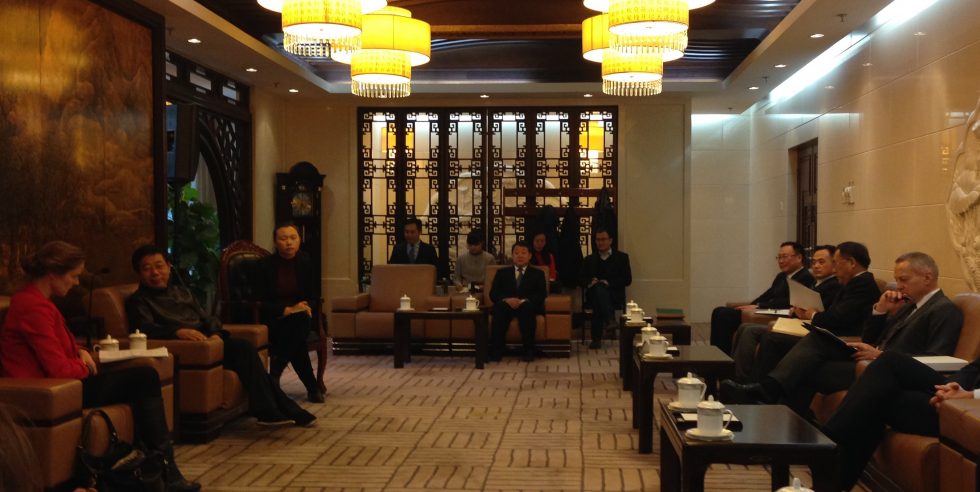 The Minister met with China’s newly appointed Minister of Education, Chen Baosheng. They had an opportunity to discuss about the Sino-Danish collaboration on primary and vocational education, as well as about the support needed for innovation and entrepreneurship in society, through reform of education.

Innovation and entrepreneurship are among the topics most frequently mentioned in the Chinese government’s 13th Five-Year Plan, which gives an outline of China’s economic transition toward a moderately prosperous society in 2020.

Children and young people play a key role in this transition, reflected in the planned reforms of the educational system. Reforms should also include support programs aimed at strengthening students’ ability to think in a creative way and get new ideas.

This topic was also at the centre of a seminar on learning methods held the Danish cultural centre in Beijing, in which the Minister also participated. The seminar, organized by Lego Group in cooperation with the Danish Innovation Center in Shanghai, was also attended by Lego’s management, including Jørgen Vig Knudstorp and Kjeld Kirk Kristiansen, who were in China to open a new Lego factory in Jaixing, Zhejiang Province.

The Minister in her speech highlighted the importance of learning through play, and how for decades Danish schools and kindergartens have been focusing on nurture children and young people’s ability to solve problems and think creatively. Deputy Director General Yu Jihai from the Chinese Ministry of Education stressed that China also shares the vision of cultivating innovation through increasing focus on problem solving and learning through play. A good example of this is an existing and extensive cooperation program between LEGO Education and the Chinese Ministry of Education.

The Danish Minister during her visit also met with his Chinese counterpart on gender equality, Ms. Song Xiuyan, Chairwoman of the All China Women’s Federation. During the meeting, both sides highlighted the G4 cooperation between Denmark, Kenya, Mexico and China during the CSW (Commission of the Status of Women). The Minister hoped for organizing a side event to be held in New York in 2017.

Representatives from five Danish vocational education; EUC Syd, Metropol, Selandia, IBC and TEC were in Beijing participating in a three-day seminar on the challenges for vocational schools in Denmark and China.

The seminar, involving 29 Chinese schools across China, discussed topics including a great shortage of qualified young talents with vocational skills that China’s labour market and its rapidly growing service sector are facing, as well as the need for comprehensive reforms in this area to get rid of the stereotype of associating vocational training with low social and economic status.

Chinese vocational schools look to countries such as Denmark, which have managed to make vocational education attractive to students and closely linked to business.