In August 2007, diplomat Charlotte Laursen ended her position in Vietnam as Deputy Head of Mission at the Embassy of Denmark in Hanoi. Since 20 August 2015, she is however back, this time accredited as Denmark’s Ambassador to Vietnam.

During her absence, Vietnam has undergone a number of changes, described by a fascinated ambassador as an “impressive socio-economic development – a development that goes very well in hand with the dynamic of the bilateral relationship between Vietnam and Denmark.”

“Besides the visible changes due to Vietnam’s yearly economic growth of above six percent, which has had a significant effect on infrastructure, new buildings, shopping malls etc., I think the main changes since my last posting to Vietnam are related to use of social media; a growing middle class; and a young generation who are better educated, and who are more exposed to the western lifestyle through the Internet. These changes, I believe, have also caused a change in mind-set, which has made huge changes within Vietnam,” Denmark’s Ambassador to Vietnam, Charlotte Laursen elaborates to ScandAsia.

And not only has Charlotte Laursen’s job changed, but so has the relationship between Denmark and Vietnam.

“Last time I was in Vietnam, the main focus was management of our big development cooperation programme. Since then changes economically in Vietnam have of course also meant changes in our work. Today we have phased out the traditional development assistance and are focusing strongly on trade and investment. Vietnam has remained a global priority country for the Danish government, and the main task for the Embassy in the years to come is to further strengthen our relations, not least our commercial ties,” the ambassador explains.

1.3 billion dollars from Denmark
The traditional development programme lasted until 2015, where Denmark had in total provided Vietnam with the whopping amount of over $ 1.3 billion (DKK 90.8 billion) over a twenty-year period, making the small Scandinavian nation one of the largest bilateral donors in Vietnam, when it comes to Official Development Assistance (ODA). The phasing out of the development programme took place gradually.

“In the beginning, we supported Vietnam with loans to rebuild after the war, but in 1994 the Danish assistance changed into actually development programmes, such as sector based programmes and budget support,” says the Ambassador. ” Many years of close development cooperation has created a very strong partnership and friendship between Denmark and Vietnam that still exists. We have managed to transform our relationship from development partners to a broader, and more mutual and respectful partnership, with a focus on commercial, political, cultural and environmental issues. I think Denmark has succeeded in our transition here in Vietnam due to the economic development in Vietnam, but also due to the very strong partnership and friendship we have between our two countries.” 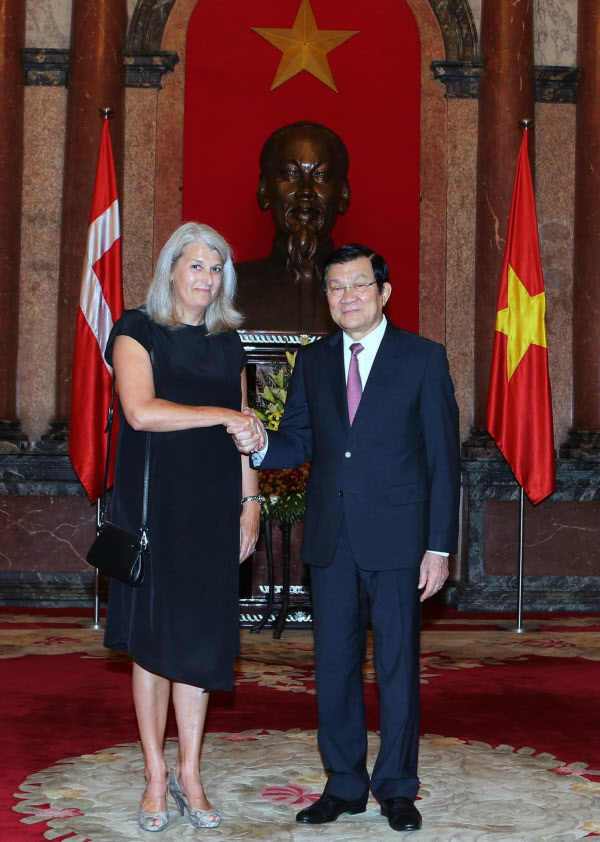 “Vietnam is no longer a priority country in an ODA sense, but is a very important commercial priority in Southeast Asia for Denmark; it’s an interesting market for Danish companies and in that aspect the transformation to a closer partnership in trade and investment is very important,” states the Ambassador.

But even with the traditional ODA closed, there are still envelopes in the overall Danish ODA to which there can be used to support Vietnam.

“In that sense we will continue to support Vietnam, when it comes to climate change and we have, as a number of other countries, started up with strategic sector cooperation, a kind of peer-to-peer cooperation. From August 2015, two growth advisors were posted at the embassy, one working with environment and food safety, and the other with education and health. The strategic sector cooperation is basically a technical assistance programme, where Denmark facilitates technical assistance from public experts to their Vietnamese counterparts.

This matches well with Vietnam’s ambition to develop into a modern and higher middle-income country by year 2035,” explains Charlotte Laursen.

Ensuring even stronger partnership
In 2016 the two countries celebrate 45 years of diplomatic relations.

“This is quite significant, Denmark being one of the first western countries to recognise Vietnam back in 1971. It is important to celebrate such long term relations, so we have been carrying out a number of activities to mark the 45 years. The visit by the Danish Minister for Foreign Affairs was an important part of these activities, which was interesting and rewarding. He had meetings with top government representatives, including meetings with the Vietnamese prime Minister, Foreign Minister and Minister for Planning and Investment. The main purpose of the visit on 11 – 13 October by the foreign minister Mr. Kristian Jensen was to further strengthen the bilateral partnership, not least with a strong commercial focus,” the ambassador states. 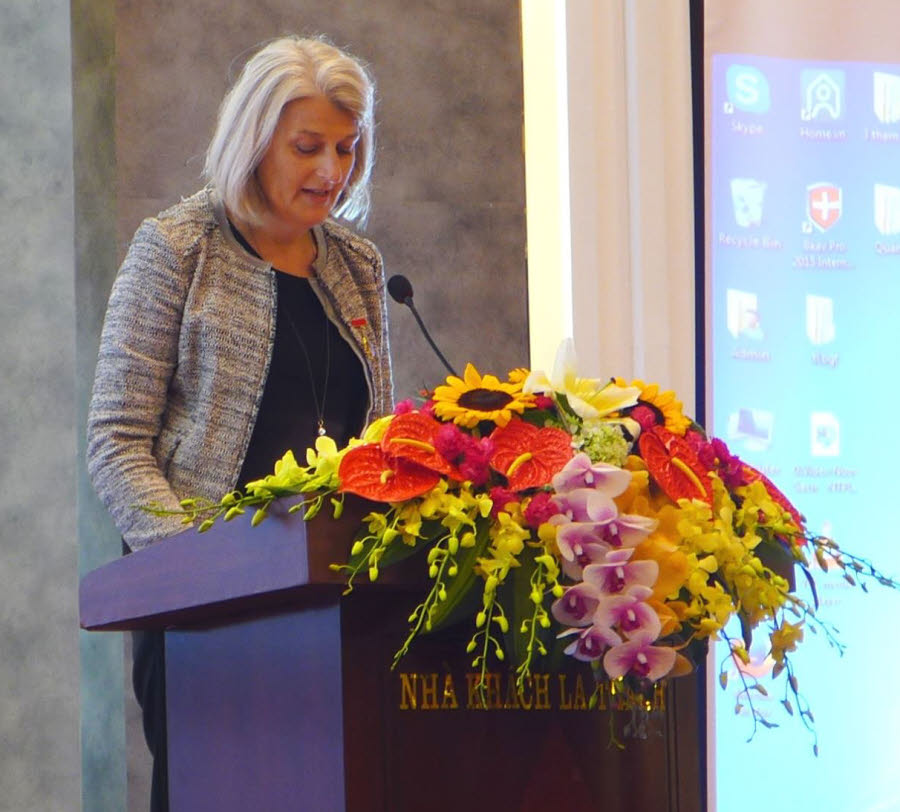 “As one of few European countries Denmark signed a Comprehensive Partnership Agreement (CPA) in 2013, which is the umbrella for our partnership. It has five important pillars and it was in that context the visit took place,” the ambassador comments on the partnership going forward. She adds: “This agreement sets the platform for the shift from a partnership-based almost exclusively on development cooperation, to one embracing all aspects, including political dialogue, commerce, and culture. It is followed by targeted action plans. In my opinion, the CPA a very good platform for the work we are doing, with a strong focus on sectors where Denmark has also strong commercial competences.”

Commercial services in the north and the south
“Basically some of these ODA programmes and projects are very useful also when it comes to dialogue on a commercial scale,” says Charlotte Laursen and explains that as Denmark transformed its partnership Vietnam some of the staff who worked with development assistance has been transferred to do commercial work.

“With this transfer, we have been able to keep some of our good and knowledgeable colleagues at the embassy, creating a strong position for our commercial work. Is has proven very useful for Danish companies especially within the agricultural sector.

To a large extent, the embassy’s commercial work takes place via the Danish Economic and Commercial Office (DECO) in Ho Chi Minh City, which assists Danish companies with commercial services.

“Deco is a fully integrated part of the embassy here in Hanoi. A satellite office, which is of great value to us as Vietnam’s commercial centre is in the south,” the ambassador explains and adds: “When we look at the number of Danish companies in Vietnam, we have app. 130 companies established here, of which two thirds are in the Ho Chi Minh City area. At Deco, Denmark offers the same kind of service to companies as at the embassy in Hanoi. We have a professional trade team here in Hanoi and another in Deco and they work closely together. I travel frequently to Ho Chi Minh City myself and take part in the work they are doing.” 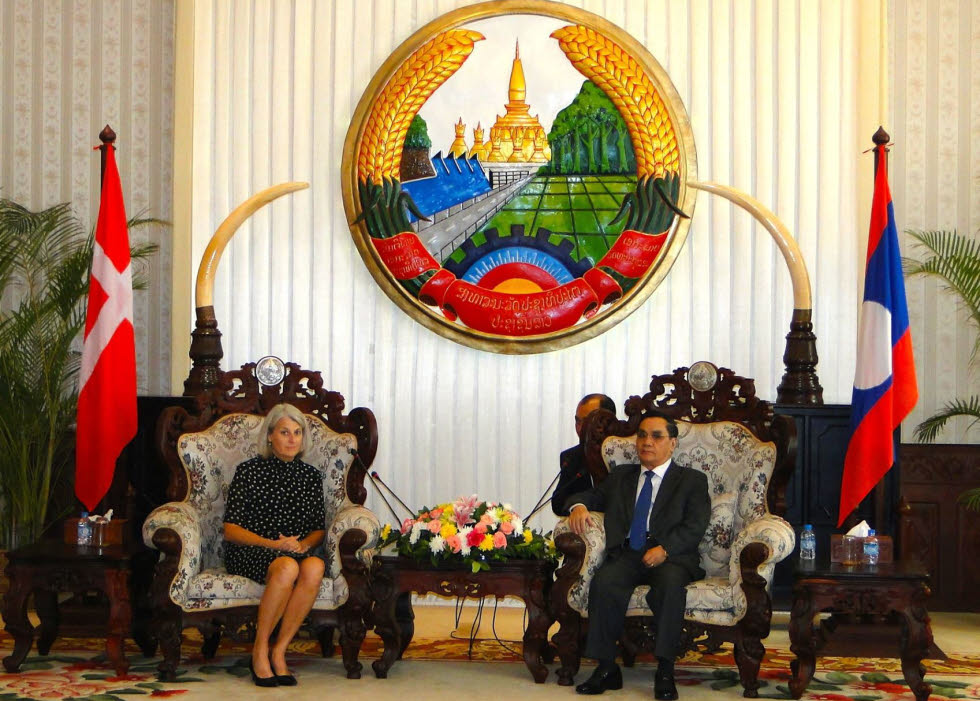 Danish solutions needed
Commenting on the business climate and progress for foreign companies in terms of doing business in Vietnam Ambassador Laursen paints a positive picture.

“Overall it’s very interesting market for Danish companies, and I would also think to Scandinavian companies in general. You can point to the fact that Vietnam still has high growth rates; it is expected to continue at about six per cent in the coming years. So Vietnam is keeping up its high economic growth. And, looking at Danish companies, what Vietnam demands in its further economic development, is actually solutions where Danish companies are very strong; when it comes to green energy, energy efficiency, quality food products, farming, pharma and education. So in that sense I can see a huge potential and I also think that many companies see Vietnam as such.”

The Danish embassy stays in touch with many of these companies and also regularly gets contacted by new companies that want to explore the market.

“Until now it has mainly been for production, but we now see that also retailer companies look at Vietnam with interest, a market with a growing middle class and with almost 100 million people. But there are also challenges in doing business in Vietnam. Challenges like bureaucracy, corruption and lack of transparency. So, for many SME’s Vietnam should not be their first export market”, the Ambassador comments.

FTA a driver for change
Finally, it is of course of great significance for Denmark that Vietnam so far is only the second ASEAN country, with whom the European Union signed a Free Trade Agreement (called EVFTA) in late 2015. This agreement presents opportunities in a global trading partnership valued over 28 billion Euros in 2015. 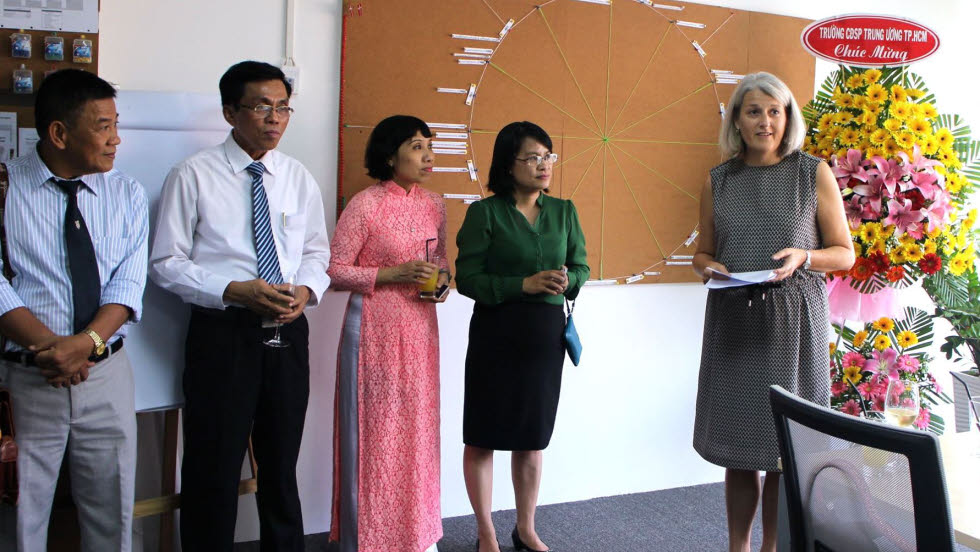 Denmark’s ambassador also believes that this FTA will drive other changes: “It has been seen by many of us as a force for some of the continued economic reforms in Vietnam. Vietnam is very much aware of the need for a more sustainable economic growth model. Renewable energy and environmental issues are high on the agenda as well as the establishment of a strong domestic private sector. That will also include privatisation of State Owned Enterprises and creating a fair domestic business environment, including incentives for SME’s”, Ambassador Charlotte Laursen concludes. 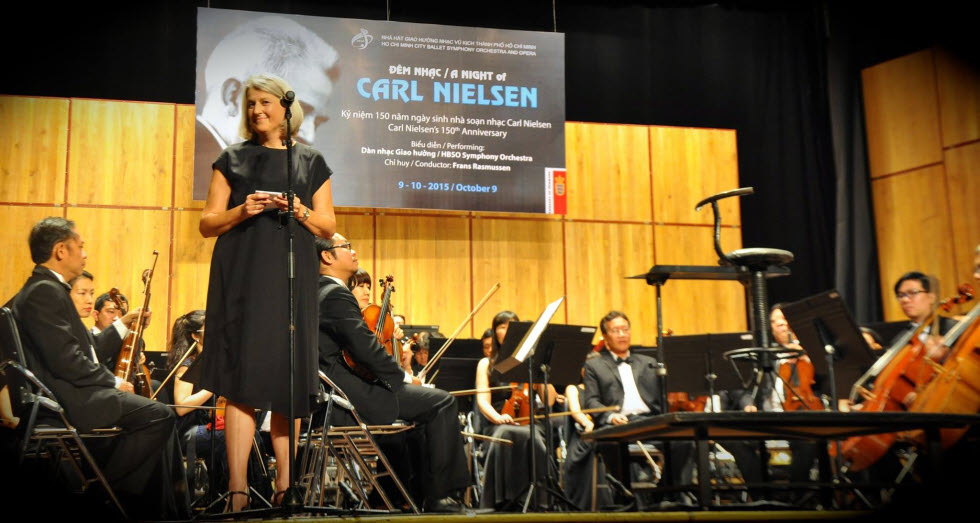