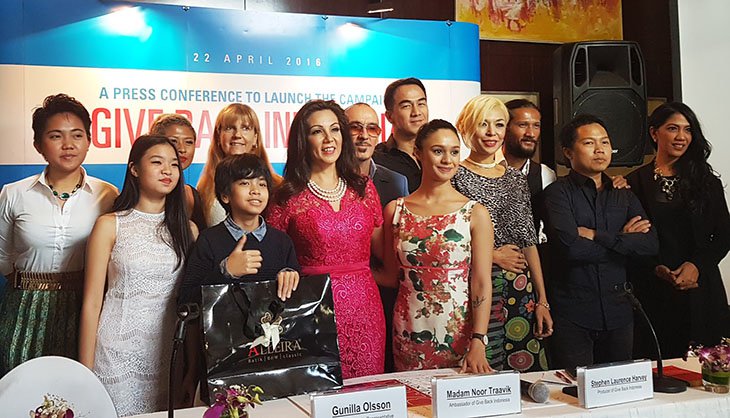 “As Indonesia becomes stronger and more prominent in the world, Indonesians want to help and show solidarity. A few Pioneers among Indonesian philanthropists and celebrities are already engaged, and I think more and more people will join in showing solidarity with those who suffer,” says Madam Ibu Noor Traavik, the spouse to Norwegian Ambassador to Indonesia.

“This generous gesture shows that everyone can contribute to improve the lives of children and to provide them with a fair chance to grow up healthy and protected,” said UNICEF Indonesia Representative Gunilla Olsson.

The video, produced by Stephen Laurence Harvey, was donated to Madam Noor Traavik, the spouse of Norwegian Ambassador to Indonesia and long-time friend of UNICEF.

“We first played the song during the “Voices of Children” concert in 2015 and everyone loved it. I have worked with UNICEF before to fundraise for children in crisis and conflict areas and that’s why I’m choosing UNICEF to hand over the video to now,” says Madam Noor Traavik.

The producer and co-writer of the song, Stephen Laurence Harvey, said the idea to create the music video came after he was asked to write a song by his close friend Jonathan Liu, which would inspire people to help children.

The collaboration resonates with UNICEF’s belief that to deliver the best results for children we all need to work closely together and join efforts with many stakeholders, including the private sector because children are everybody’s business. The private sector plays an important role in helping improve the quality of children’s lives.

Partnerships between businesses and UNICEF offer mutual benefits, combining the proven value of Corporate Social Responsibility, raising the profile of the company while enhancing UNICEF’s work on behalf of the most vulnerable children in the country.

“We engage with the private sector to benefit from their technical know-how and entrepreneurship to test innovative ways of improving services for the most vulnerable mothers and children, as well as to raise much needed funds to support our work,” says Ibu Traavik Noor.

The video recording will be used by UNICEF to enhance fundraising efforts and includes a link to the UNICEF donation page to encourage people, businesses and private sector, to Give Back to Indonesian children.